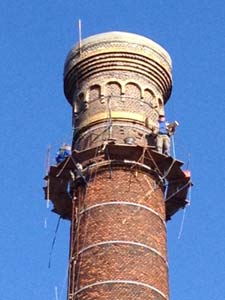 Factory chimneys were the symbol of industry and economic prosperity for two centuries. Their rise is linked to the advent of steam engines from the end of the 18th century. Afterwards, they were raised higher and higher, also to disperse the fumes from many industrial processes so that people on the ground would not be bothered by them.
By the 1990s, most had reached the end of their life cycle. The image of smoking chimneys became a symbol of environmental problems.

Factory chimneys stand out and are landmarks within urban and rural areas.

As chimney after chimney went against the ground, discussions arose in many countries from the end of the last century about their fate or future, as monuments, as symbols of an industrial past.

On 9 December 1997, the Stichting Fabrieksschoorstenen (Factory Chimneys Foundation) was set up in the Netherlands with the aim of "studying and preserving factory chimneys that can be considered part of the industrial heritage". This association, which will soon celebrate its 25th anniversary, regularly intervenes for conservation and restoration of chimneys in Dutch municipalities, established an extensive documentation collection and database, and published a book with 462 pages and over 800 images on factory chimney construction in the Netherlands (1775-2017).

In 2004, when Lille (Lille) was the "Cultural Capital of Europe", the association "Le Non-Lieu", founded two years earlier, organised a series of events highlighting the heritage of factory chimneys in Roubaix, "La Ville aux 1000 Cheminées" (The City of 1000 Chimneys). Three years later, on 1 May 2007, the slogan "Beffrois du Travail" ( Belfries of Labour) was launched, in a region where, in the Middle Ages, belfry towers  visible from afar were the symbols of city rights. Since then, the ‘chimney-belfries’ have been elevated to symbols of labour and for workers in northern France. Every year, until today, all kinds of playful and artistic activities take place around chimneys. The actions also had the effect of preserving and restoring chimneys.

In 2007, the Asociación en Defensa de las Chimeneas y el Patrimonio Industrial de Málaga (Association in Defence of Chimneys and the Industrial Heritage of Malaga) was founded, with the current result that all this city's tall chimneys are preserved.

hese are just a few examples of organisations working in Europe to preserve and interpret factory chimneys
Meanwhile, more and more cities stopped the demolition of factory chimneys and here and there factory chimneys were scheduled as historic monuments.
In 1992, in Belgium, the chimney of the Ramskapelle brickworks on the Yser Front, which was converted into an observation post for Allied troops during World War I, was protected as a monument. In 1995, the tall concrete Monnoyer chimney of the former coal mine of Zolder was also protected.
In 2005, the tall chimney of the Barker textile factory in the city of Turku was in danger of collapsing and the owner of the building requested permission to demolish it.  The permission was rejected by the municipality of Turku. The chimney was preserved as industrial heritage in the historic cityscape.

These are just a few examples of how interest and attention to factory chimneys has increased since a quarter of a century.

Chimneys have now become 'heritage'.
Yet factory chimneys still disappear every day
Fewer than 5% are thought to remain today.
If nothing is done, an important industrial monument, so closely associated with and symbolic of our industrial development, will disappear completely from the horizon. We would thus lose an essential part of our industrial heritage.

1) We hope to compile - with the help of associations and volunteers across Europe - a survey of surviving factory chimneys and their condition. A questionnaire has been prepared for this purpose. It can be downloaded in several languages at the bottom of this web page .
The data will later be made available on a website.

2) We ask everyone to organise creative, artistic or popular activities during the year at the foot or in sight of a factory chimney, so as to draw attention to it.
Make a short video of it and post it on Youtube or Vimeo, notify the coordination secretariat. Emphasis is put on initiatives and activities during May, but activities can also be organised in all other months to put chimneys in the spotlight.

3) We also want to establish a European network of partners willing to invest sustainably in the (re)valuation of factory chimneys, both locally and on a European level, and willing to share knowledge and experiences on conservation and restoration.

We also look for additional partners do develop and submit a project to one of the calls of the European Union.
If you want to join, contact us !!!